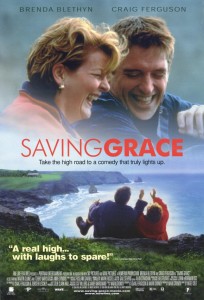 Summary: A newly widowed middle aged woman grows dope to pay off her husband’s debts and save her home.

I watched this again last night, and its charm remains strong. I’m not into stoner films, but this is a delightful contrast between the middle class middle aged heroine, if you’ll pardon the pun, and her desperate venture of growing hydroponic marijuana to save her home, after her hugely indebted husband dies, leaving her facing bankrupcy.

The small coastal town setting adds to the fun, with a delightful mix of strange characters. Doc Martin makes his first appearance here, although he’s far more charming and friendly than his latest incarnation in the successful TV series that’s so entertaining.

The central character has a mix of sweetness, humour and vulnerability, and it’s only natural that she’d consider this way out of her financial troubles. Again, it’s the remarkable combination of heart and humour that gets me every time.

Some of the scenes you might have seen before, but there’s a gentle innocence that comes with the laughs, largely due to the quiet rural English village in which the story is set.

Even if you’re staunchly against drug use, this little film is well worth seeing.

The film is about dope, so be warned!

Some exposed body parts now and then, but not in a sexual way.