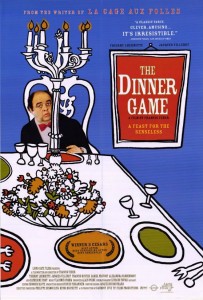 Summary: A group of snobs bring so called idiots to dinner, in order to ridicule them. However, one bites back.

This is one of four French comic masterpieces by Francis Veber, so if you can’t handle reading subtitles, make sure you get the version dubbed in English.

Tales of underdogs are often popular, and this is no exception. It’s great fun to watch the snobbish host get undone (hoist by his own petard?) by a idiot he invites for dinner, and it’s no more than he deserves. The idiot, although not smart, is a far nicer person.

He has absolutely no idea how his actions will bring his host back down to size, and it’s always amusing to watch as the penny finally drops. He apologises often and profusely, which only rubs it in further. His host is astounded at how quickly things fall apart.

Delightful complications show up in the form of the host’s wife, his girlfriend, the estranged ex friend whose woman he stole, and an unexpected visitor from the tax department. The interplay between this mixture adds greatly to the mishaps.

If you’ve seen the embarrassing American remake, please don’t judge the original, which is ten times as good. I watch it every year or two, as it never loses its appeal.