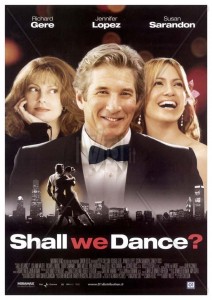 Summary: A middle aged man is seduced by ballroom dance, and sneaks away for classes, worrying his family.

This is another film the critics got wrong. While it’s safer than the Japanese original, it’s still a lovely film, full of joy and humour and warmth. It might be hard to imagine Richard Gere as a shy middle aged man, but he pulls it off pretty well.

I’ve also been attracted to ballroom dancing, and can easily relate to his character finding it very alluring. The music and passion, the rhythm and energy. Seeing J Lo at the window of the dance studio probably had something to do with it as well 🙂

Susan Sarandon plays his lovely wife, suspicious that he’s having an affair. As usual, she brings great presence to her role, and the interplay between the two is very sweet as she finally figures out what he’s been doing all of those late nights away.

There are some hilarious scenes at the studio, and Stanley Tucci is especially funny and sad as a passionate dancer who’s too scared to share his joy at work.

Things work out well at the end, as expected, but the journey is very poignant at times, as well as countless laughs to be had along the way.

So which to watch: this or the original? Both – they are each well worth seeing.