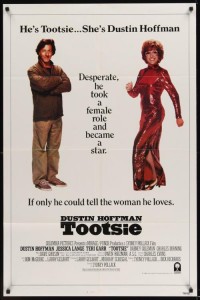 Summary: A talented but prickly actor can’t find work til he reads for a popular TV soap opera, dressed as a woman.

This timeless comedy still speaks to us, over 30 years later. Dustin Hoffman, in one of his best roles, is a precious actor who is so hard to work with that nobody wants to hire him any more. In desperation, he dresses up as a woman and gets a big part in a TV soap.

Much of the comedy comes from him trying to keep his new identity secret from his girlfriend and others, while at the same time trying to deflect attention from men.

He becomes a big success on the soap, far more successful than he ever managed as a man.

To add to his troubles, he falls for one of the actresses, and although they get on very well as girlfriends, he wants more, but can’t figure out how to go after her.

It’s so easy to relate to his dilemmas, as he tries to do the right thing, not lie too much, not get caught out, not hurt anybody, pursue the woman of his dreams, and still keep his job.

The shinanigans on the set of the TV soap are also entertaining, poking fun at stereotypes of directors, agents, and anybody who gets in the way!

An extra treat is Billy Murray in a wonderful supporting role, playing a (relatively) straight part for a change. Even so, he just can’t help being funny.

This is a great date film, sure to bring up much to discuss about the battle of the sexes. But most of all, it’s a heartfelt comedy, thoroughly entertaining from start to finish.