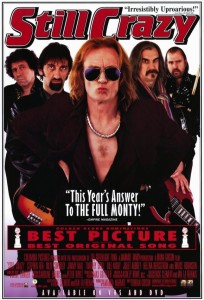 Summary: a 70s rock band reforms for the money, and battle with familiar doubts, egos, and ghosts of the past.

This is perhaps the funniest film about rock n roll ever made. People rave about Spinal Tap, which is very entertaining, but this is a league above it. Consistently funny, but with a heart, great original music, and very moving at times. The cast is incredible, too.

It’s written by the folks behind the magnificent British TV series Auf Wiedersehen, Pet, and two actors from that show appear in this film, along with the genius of Billy Connolly and Bill Nighy. It’s hard to pick who’s best here, so good are they all.

Apart from a bunch of overgrown children trying to keep it together long enough to make some money from the reunion tour, there’s a lovely thread involving a returning groupie, who still holds a candle for the former lead guitarist, who couldn’t handle the pressure.

If this reminds you of Pink Floyd or any number of similar bands, it’s not surprising. There are frequent doubts within the band about whether they still have what it takes, and they constantly risk breaking apart again, the same way they split up 20 years before.

Billy Connolly adds some wise narration every so often, which just adds to the humour.

Surprisingly enough, the music is excellent as well as authentic, and a few of the anthems are haunting, especially with how they fit into the storyline.

If you’ve ever laughed at the Stones and other groups of their era, still touring into their 50s, 60s and beyond, this film will be right up your street.

A few sexual scenes, implied rather than shown.