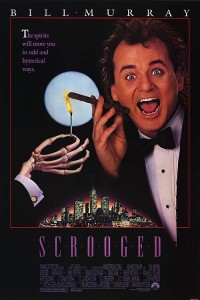 Summary: Charles Dickens‘ serious A Christmas Carol as a comedy. Scrooge gets visited by 3 ghosts on Christmas.

Bill Murray yet again carries a comedy, this time as Scrooge, being cruelly despotic, and hilariously funny, often at the same time. Yet the heart of the original shines through, and the familiar tale of Christmas transformation isn’t lost underneath all the fun.

Karen Allen is perfect as his sweet faithful girlfriend, who shines constantly against his depravity. She tries and fails to be his conscience, but when that doesn’t work, the three ghosts of Christmas past, present and future ensure that he finally gets the message.

The ghosts themselves are a riot, and although Scrooge pretends they’re not getting to him, eventually they have the desired effect. But don’t imagine this film is even slightly boring, as even when Scrooge is transformed, BM keeps the comedy coming.

While it might not look like a typical feel good Christmas film at the start, rest assured that your time will be well spent. It really is a classic, worth watching every Christmas.

Some violence, but nothing particularly distressing.

None I can remember.