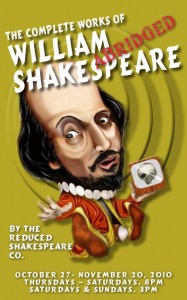 Summary: Three mad and deluded actors take on everything Shakespeare wrote … in an hour and a half.

This film (and stage musical) is great fun for those who hate Shakespeare, but those who love him will have mixed reactions. Obviously, I find it a riot!

Much of the performance is improvised, so each show is different. I’ve seen it twice live, and both performances are different from the DVD. All three were great fun.

The fourth wall isn’t just broken, it’s totally destroyed, and the audience is often involved, with various degrees of willingness! The cast frequently stop in the middle of a scene to argue about something, and often involve the audience to support their position.

They also have no qualms about jumping down into the audience every now and then, gleefully adding further to the mayhem.

Although it might seem very disrespectful to the Bard, it’s in exactly the same spirit as much of his writing, and I can imagine him laughing loudly while watching this.

This comedy is probably not recommended for those who are serious about the Bard.

Many, many fake deaths, all done in a very silly manner.

There’s a great deal of cross dressing, and some simulated sex.