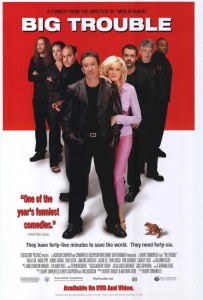 Summary: a strange suitcase brings together pairs of assassins, single parents, thugs, teenagers, and the FBI.

This riotous adaptation of Pulitzer prize winner Dave Barry’s book manages to be just as zany and entertaining. I have no idea why the critics didn’t get on board, but there’s no accounting for taste. I’ve always been a huge fan of Dave Barry’s writing.

Much of the humour here comes from the collection of strange people coming together, only a few of whom are actually sane. Their reactions to the madness going on around them provide a calm centre during an increasingly bizarre tale.

The two leads try to keep a handle on things, but struggle to make sense of the increasingly desperate efforts of those around them. I can sympathise!

There’s a pair of world weary assassins from New York, who find Miami hard to cope with, even more so when it seems that others are pursuing their target. The more their attempts at pulling off their contract fail, the more they’re convinced they should just leave.

The animal world chips in to add to the confusion, with a toad that spits psychedelic poison, a dog that’s way way too friendly, and a goat with amazing luck.

There’s some shooting, but no deaths.