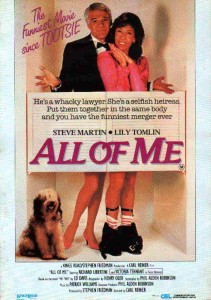 Summary: The soul of a dying nasty millionairess gets transferred accidentally into her lawyer, whom she hates.

Steve Martin has been wasted recently, but this is one of a trio of films where his genius is allowed to shine fully. His physical comedy here is a delightful addition to the funny story.

Another reason to love this film is that despite the female antihero being selfish initially, as the film evolves, we get a sense of why she behaves that way, and it’s heart warming. Although it’s hate at first sight with her lawyer, she gradually manages to grow on him.

There’s also a delightful spiritual adviser who follows her around, speaking only a few words of English, and being incurably positive no matter what happens. That’s largely because most of the time, he has absolutely no idea what’s going on!

It’s always a big plus when a film combines humour with heart, and there are many authentic connections between characters here which greatly add to the pleasure of this little known film. People grow, learn, and the happy ending is a joy.

Not that I recall.