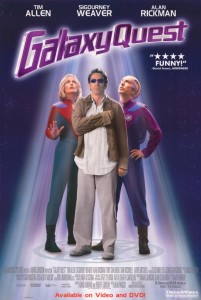 Summary: the washed out ex stars of a 70s scifi TV show are out of their depth when called upon to help real aliens.

If you’re a fan of Star Trek, or anything like it, this will be a treat! It makes fun of the entire fan boy/girl scene, as well as the aging ex stars, still making a living from the show years after it has been cancelled. Yet it’s a also a heartfelt love letter to the same things.

Scifi queen Sigourney Weaver is wonderful as the sole female actor, always relegated to a menial role, while the life expectancy of crew members wearing red shirts is also effectively mined for laughs. Not to mention oversized egos trying to rule the roost!

The visiting race of aliens is inherently funny by design, and their naive trust in the cynical group of actors is a beautiful and poignant contrast. The use of catchphrases is also played with to great effect.

Somehow at the same time, the whole story is strangely believable. Many scifi tropes are toyed with, and the climax is hilarious, and fits perfectly, given what’s come before.

Many Star Trek fans, including me, consider this one of the best Trek films ever made!

A few characters die in battle, which is surprisingly moving.