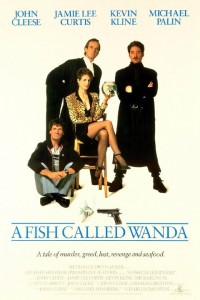 The best of British and US comedy acting comes together for this riotous story. They play together so well that nobody gets outshined, as the two ex Pythons trade barbs with two very funny Americans. Secrets and lies as usual add greatly to the mayhem.

That said, Kevin Kline did manage to pick up an Oscar for Best Supporting Actor that year. He deserved it, too, as a very intelligent actor playing an extremely stupid person. That’s always a hard task, and he pulls it off with flair and delight.

There are some lovely running gags that reappear just where you don’t expect them, and as the stakes are raised, the laughs just keep on coming.

There’s a surprising appearance of more than one foreign language as an aphrodisiac, and John Cleese has a great time making fun of his own English background.

Overall, they combine just the right balance of action and comedy, and the stellar reputation of this film is well deserved, over 25 years later.

A final note: If you’ve got to go, then this might be the best way, when a viewer actually died laughing when watching the film. So this foursome join the English TV comedy trio The Goodies as the only comedians who’ve ever achieved this unusual feat.

A few gunshots, but they don’t hit anybody. Two small animals don’t survive the film, but as can be guessed, the whole process is done with great humour. I’m a huge animal lover, but even I couldn’t help cracking up during the sequence.

John Cleese again manages to get naked for his art, but covers up nicely in spite of it.