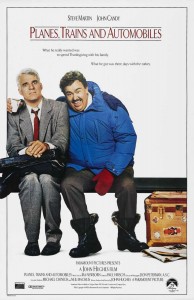 While not quite a two hander, this film is almost completely carried by the hilarious interplay between the two lead actors. It’s amazing how much fun they create as they share one disaster after another while trying to find their way home for Thanksgiving.

Yet both characters are somehow believable, and there’s real heart throughout this film, despite all the madcap adventures. Even though neither can stand the other on several occasions, they try to make peace, while events conspire to keep them together.

Both characters are sympathetic, and it’s easy to relate to the challenges they create for each other. Anybody who’s struggled with a lousy transport system will find this familiar territory, although it’s much funnier than my experiences ever were!

The ending is very touching, and shows that comedies don’t have to be heartless.

This is the perfect film to see any time from Thanksgiving to Christmas to the New Year.

There’s quite a bit of swearing.