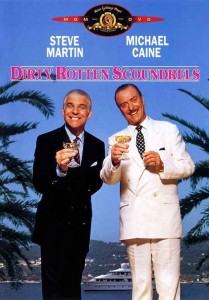 Summary: Two conmen who live off women battle it out for the right to a work a wealthy Riviera town.

Two men who cheat rich women for a living are somehow made hilarious by two top comedy actors. They play totally opposite characters, which creates much of the comedy.

But don’t feel sorry for the women, as they’re not all quite as helpless as they seem.