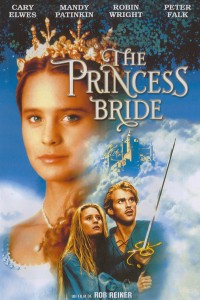 Summary: A wicked prince steals a local beauty for his wife, and only the mysterious Man in Black can save her.

If you’re after a film that appeals to the whole family, you can’t go past this wonderful tale of true love and high adventure. It’s a modern fairytale, told with gentleness and whimsy.

The romance is delightful, and the entire film is peppered with quotable witty remarks. I could quote it all day, and often break out into swapping quotes with other fans! Mandy Patinkin, a hugely talented actor and singer, always mentions how this role is the one his fans appreciate the most. He has no choice but to say his famous line when they ask.

There’s also a lovely bookend device used where Peter Falk appears as a grandfather, reading the story to his grandson. At first the kid, brought up on video games, isn’t impressed by a mere book, but as the story continues, he gets hooked. Just like me!

There’s even a short rhyming scene which is hilarious. Sworn enemies speak to each other with great respect, even if their actions give away their real character. It’s such a joyful film in countless ways, and another one I watch every year or so.

I only recall a single moment where with semi realistic violence, and even that wasn’t bad. It showed only the reaction of the recipient. Apart from that, a few punches here and there, but very tame overall.